It has been brought to my attention by one of my readers that the line wobble I mainly talk about is not particularly detrimental for the Huion H950P. As such, I will no longer be recommending against the Huion H950P.

The explanation why is below. 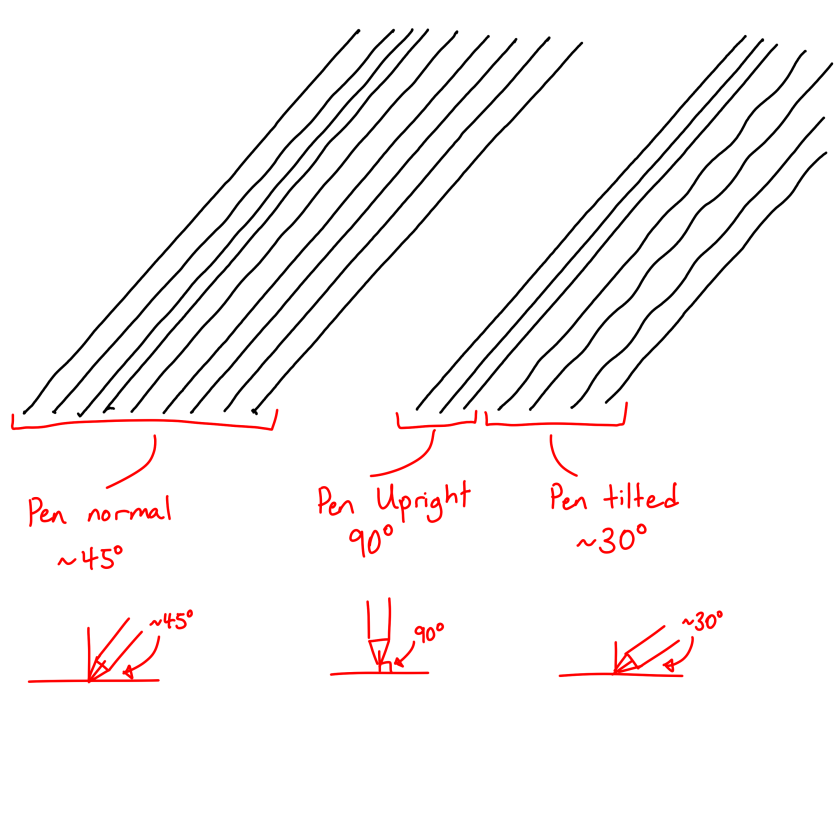 Above is the slow ruler line test I did before for the Huion H950P while holding the pen at different angles.

As you can see, there appears to be more wobble the more tilted you hold the pen, which is obviously not ideal. However, the “normal” pen angle is completely fine and usable, despite being slightly wobbly.
My mistake was interpreting these results as a fail when they were clearly good enough, with only a bad result for an angle that not everyone will use the pen at. It should also be noted that most people will draw quicker than I did on this test which would reduce the amount of noticeable wobble even more.

In conclusion, the Huion H950P is not a bad tablet. It is instead a completely viable tablet which just has a small imperfection which can be ignored in many use cases.

As such, I am removing the Huion H640P from the title, but will continue recommending against the Huion H950P until the wobbly line issue is completely addressed.

To check that your firmware version is up to date, open your Huion driver with your tablet plugged in, then on the “About” screen, press the keys Ctrl+V+E+R. The firmware version of your tablet should now be displayed.
To get the firmware update, you can send your tablet serial number, order number and your OS version to service@huion.com and they will send you a firmware upgrade package. Please make sure to follow the included instructions precisely to install it properly.

Huion H640P Firmware Update
The firmware update version HUION_T173_181115 for the Huion H640P addresses all the issues I have mentioned regarding the H640P in this post, which are:
-Non-linear pen pressure
-Bad click sensitivity
-Wobbly lines

The above 2 images are my testing pages which test pen pressure and line wobble.

Also, in the line wobble test, you can see that the slow ruler lines are not very wobbly at all. This is a massive improvement from how wobbly the lines were before this firmware update.

Huion H950P Firmware Update
The firmware update version HUION_T172_180623 for the Huion H950P somewhat improves the wobbly line issue in some cases, but it was not able to solve it completely.

Above is my test page drawing slow diagonal lines with a ruler on the H950P.
I did a few lines holding the pen at different angles, and as you can see, the lines become extremely wobbly when you are not holding the pen 90 degrees upright, as compared to very tilted.

Conclusion
The firmware update for the Huion H640P completely brings it back into contention as a fantastic affordable starter tablet.
However, on the other hand, the Huion H950P still has its original issue with wobbly lines even with the new firmware update.
With that said, it should be noted that the wobble when using the pen at “normal” angles is completely acceptable now. If you do not intend to use the Huion H950P while holding the pen at an extreme angle, it should be quite a decent tablet now after the firmware update.

To check that your firmware version is up to date, open your Huion driver with your tablet plugged in, then on the “About” screen, press the keys Ctrl+V+E+R. The firmware version of your tablet should now be displayed.
To get the firmware update, you can send your tablet serial number, order number and your OS version to service@huion.com and they will send you a firmware upgrade package. Please make sure to follow the included instructions precisely to install it properly. 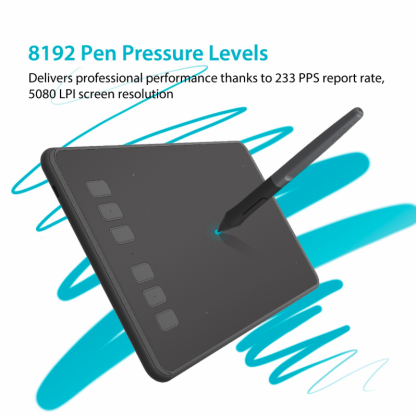 (Nov. 11, 2018) Edit: I got myself a Huion H950P and completely rewrote this post which was previously based on hear-say from other H950P buyers.

The Huion H640P and H950P are two of Huion’s newer tablets which have very appealing specifications and features, including a new battery-free pen. If someone were to just look at their paper specifications, they would compare these tablets with other tablets and think the Huion H640P/H950P are amazing buys for the price… but they are not.

The issues which the Huion H640P and H950P can come with are:
-Non-linear pen pressure
-Bad click sensitivity
-Wobbly lines

The non-linear pen pressure and bad click sensitivity issues appear to only affect some batches of each tablet, while the wobbly line issue seems to affect all batches of each tablets, both new and old.
I have two Huion H640P’s (bought in September 2017 and January 2018) which exhibit all 3 of these issues, and I now own a Huion H950P (bought in November 2018) with only the wobbly line issue. With that said, I have received emails from a few of my readers who got the H950P based on my recommendation earlier in the year and they have reported the same issues as my H640P, so there are clearly some batches of the H950P which also have all 3 issues.

Anyways, I will explain the issues below before explaining why I don’t think these tablets are worth buying.

The first issue with the Huion H640P/H950P is the non-linear pen pressure where the pressure “blows out” between medium and hard pressure.
This is one of the issues which only affects some batches of the H640P/H950P. 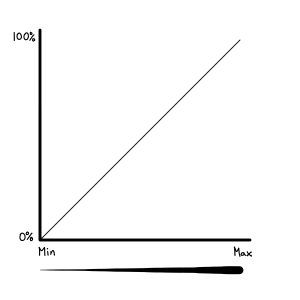 The graph above illustrates linear pen pressure. This is ideally how the pen pressure should be on any tablet where pressing, for example, 1 milligram harder will cause a 1 pixel increase in pen pressure constantly all the way from the lightest to hardest pressure, resulting in a smooth taper.
My Huion H950P has this type of pen pressure. 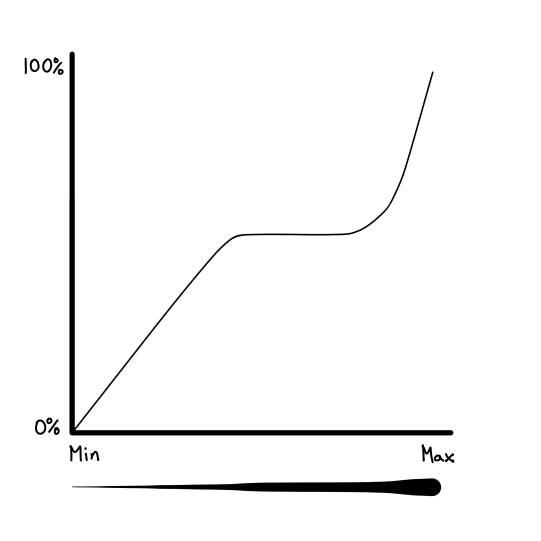 This second pen pressure graph demonstrates the non-linear pen pressure on my Huion H640P’s, where the pen pressure flattens at medium pressure and then suddenly jumps to max pressure (please note, the graph is slightly exaggerated to show which part is non-linear).
It is quite clearly non-linear when testing it, and it’s skewed to the point that it can get in the way of people who require precise control over their pen pressure.

It should be noted that both my H640P tablets have this non-linear pen pressure using all the PW100 pens I have on hand. In other words, this is not an issue caused by a defective pen.

The second issue with the Huion H640P/H950P is the bad click sensitivity, meaning they have problems registering light taps when single/double clicking icons and options.
This is another of the issues which only affects some batches of the H640P/H950P.

This appears to be a problem caused by the tablet and not the pen because the Huion H640P, H950P, and H1060P all use the same PW100 pen, but my H950P and H1060P have absolutely no problems sensing light taps when doing single/double clicks
On the other hand, the Huion H640P’s which I own clearly have problems registering light taps as clicks even when using the exact same pen which I tested on the H950P and H1060P.

From the testing I did with the H640P, H950P, and H1060P, it is very clear that it is the hardware/firmware in the H640P tablet which is causing the bad click sensitivity, not the PW100 pen. 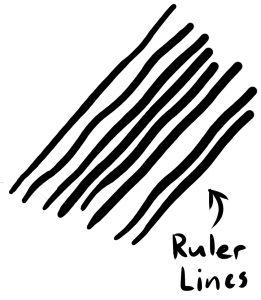 The last issue with the Huion H640P/H950P is the wobbliness of slow diagonal lines.
This is an issue which appears to affect all batches of the H640P/H950P.

This is not a particularly massive issue for many people, but it should be noted that the H640P and H950P have much more wobble than the average tablet.

Line wobble can be ignored to a certain extent as it is usually minimal enough that it doesn’t affect “normal” drawing at all, especially when doing quick strokes where stabilizers will completely negate it. This can be proven by the fact that people did not complain about the Wacom Intuos Draw/Art/Photo/Comic/3D (CTL-490 series) even though it had a noticeable amount of line wobble.
However, the H640P/H950P have enough wobble for it to be considered a problem, especially for those who do inking with slow controlled strokes.

Like I said, line wobble is acceptable to some extent, but the main point of graphic tablets is to have predictable and controllable lines, and the Huion H640P and H950P completely fail in that regard when you look at the wobbly lines.

You may recall from before that my H950P does not have all of these issues, and as a matter of fact, it only has the wobbly line issue.
This may cause you to think that Huion has fixed the major issues in their newer batches of H950P’s, but I will remind you that these tablets are not being sold in order from oldest to newest. They are just selling whatever they have in stock without consideration for which is an older or newer model.
This means that the possibility that you will get a tablet from an old batch with all three issues is very likely!

Unless Huion recalls all the older batch tablets from all of their sellers, you will never know whether you will get an old or new Huion H640P/H950P. This means that there is a lot of risk involved with buying these tablets.

From my perspective, these tablets are not worth considering because you’re getting an imperfect tablet either way.

Aside from these three issues, these tablets actually have no other problems with their build quality or drivers. However, these three issues are very intrusive for basically any and all workflows, although if you are lucky, you will only have to deal with line wobble.

In the current tablet market, the Huion H640P and H950P should be completely ignored as there are tablets at similar price points which offer the same features without any risk of the highlighted issues, even the wobbly lines.

If you have an H640P/H950P with the non-linear pen pressure and/or bad click sensitivity issue, you should contact their support and see if they can fix it. If they can’t, you should be able to get it replaced and see if you get a newer model without those issues. 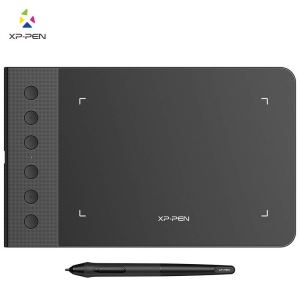 Unfortunately, I have not had the chance to try the XP-Pen G640S myself, so I am making an assumption that it draws and performs extremely well just like the XP-Pen G640 (which I have tested myself), which is the cheaper version of the G640S without a rubber grip pen.

If you were considering the Huion H950P for 80 USD, a much better choice would be to spend an extra 20 USD to get the H1060P for 100 USD which I can assure you is a fantastic tablet all around with none of the issues that the H640P/H950P has, despite using the same PW100 pen.
There is also the option of the newly released Huion H610Pro V2 which is 80 USD just like the H950P, but I have not been able to test it so I can only assume that it draws similarly to my H1060P, which it may not.

You could also consider the XP-Pen Deco 01 which is a large, affordable, and trustworthy 60 USD tablet, although in return you will be settling with a slightly cheaper feeling all-plastic pen.

Hopefully, this post helped show you that the Huion H640P and H950P are not worth buying in the current tablet market.

Please help out all digital artists by sharing this post and warning people that the Huion H640P and H950P are tablets everyone should probably avoid buying, despite looking like very good deals when looking at their paper specs.